Helensville Athletics Club was represented for the first time in the club’s history at the 41st edition of the North Island Colgate Games held at Porritt Stadium in Hamilton over the first weekend of 2019.

Lilee Allen, Ben & Georgina Collinge-Coker, Ayla & Rocco Mowat and Ottis & Tilly Oliver-Chambers made up the seven-strong squad to compete in the bright orange singlet of Helensville Athletics against clubs from all over the North Island from Whangarei to Wellington.
Helensville Athletics Club has operated for several years at its base in Rautawhiri Park to encourage and develop junior athletes and 2018/19 was the first season the club has become affiliated with NZ Athletics. This affiliation enables club members to compete in district and national events. For many club members the Colgate Games was their first taste of higher-level athletics competition and they certainly rose to the occasion. 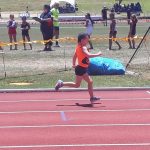 Tilly, competing in the 7-year girls’ grade, smashed her personal best in the shot-put by over a metre, and although race times are not recorded for ages 7-9, there is no doubt Tilly also ran personal bests in her 60-metre and 100-metre races. Ben won 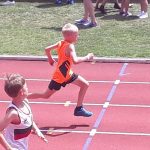 his heat in the 7-year old boys’ long jump and also picked up a third placing in his 200-metre heat. Georgina came third in her heats of the 9-year girls. 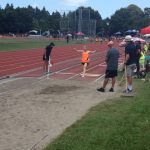 the 100-metres and 200-metres and broke the 11-year boys’ 200-metre Helensville club record in the process. Lilee matched that feat in the 200-metres by also breaking her personal best and the club’s 11-year girls’ record. Ottis ran personal bests in the 400-metres, 800-metres and 1500-metres, breaking club records in both the 800-metres and 1500-metres along the way. Ottis’ 5th placing overall in the 1500-metres was the best individual result by a Helensville athlete over the weekend.
Helensville was also able to enter a team in the 11-year old mixed 1600-metre relay with Lilee, Ottis and Rocco ably supported by youngsters Georgina and Ayla, finishing 5th team overall in the North Island.
All Helensville participants agree that the Colgate Games was a fantastic experience and are already counting down to next year’s event in Taranaki. In the meantime, they can hone their skills at the next Helensville club night on Wednesday 30th January. New members always welcome – www.sporty.co.nz/helensvilleathletic

View all posts by: Brian